We recommend you pre-purchase your tickets to avoid disappointment. Our best valued ticket is a 4 Parks Pass where you get to enjoy 4 attractions over 6 months, revenue raised is invested into vital research, environment, and education projects. If you feel unwell, please reschedule and stay at home. Thank you!

Seal Rocks, located two kilometres off the coast of The Nobbies on Phillip Island, is home to 20,000 seals - one-quarter of the entire population of Australian fur seals.

Seal research conducted at Phillip Island Nature Parks investigates climate change impacts on the fur seal numbers and their foraging behaviour and diet. We also focus on human caused impacts that affect their health and survival including marine plastic and toxicants in the ocean.

Want to help our scientists with their seal population counts?

WHAT DOES THE RESEARCH TEAM FOCUS ON

Four species of seal were once common in Bass Strait and were all but wiped out by sealers over just 40 years in the early 1800s. The ecosystem has changed dramatically since then due to urbanisation and industrialisation of our coastlines, and the species in it respond differently to the challenges they face.

In our seal research we focus on the Australian fur seal (Arctocephalus pusillus doriferus) as an ecosystem sentinel – a top predator of Bass Strait and an indicator of the health of the ecosystem and food webs beneath it. We also study the long-nosed fur seal (or New Zealand fur seal, Arctocephalus forsteri), which is recolonising Bass Strait as its populations recover in South Australia. Both species are protected marine mammals and are native to Bass Strait and surrounding waters.

Since 2007 we have measured a significant reduction in pup numbers for the Australian fur seal. To understand and mitigate this, our research focusses on potential causes of the decline including climate change, entanglement and ingestion of marine plastics, health and disease, and changes in diet and foraging behaviour. We also work hard on changing human behaviour to reduce the threats for marine species.

To explore the fur seal research programs in detail, please view the latest publications here and see a list of our current students here.

We use telemetry devices glued onto the fur of the seals to explore where they travel at sea to find food and how long they spend there. Once the fur seal has performed at least one foraging trip, we recapture the seal and retrieve the trackers to reuse them. If we aren’t able to do this, the tracker falls off when the seal moults their coat. Devices include satellite linked location devices (PTTs and GPS) to see where they go, time depth recorders (TDRs) to understand their diving patterns, as well as accelerometers to look at specific foraging movement and predation events. See the publications listed below for more information.

For our latest research check:

At Seal Rocks we assessed Australian fur seal diet over 17 years (1997-2014) by identifying the remains of prey in scat (poo) collections sample during research visits every two months. So far we have identified 71 prey taxa comprised mostly of fish (90% of samples) and cephalopods (squid, octopus, and cuttlefish, 10% of samples). When DNA methods are used the diet includes cartilaginous fish (sharks and eagle rays).

The main prey eaten by the fur seals has changed between 1997 and 2014. This variation is related to both large-scale and local-scale oceanographic conditions. The propensity for diet regimes to exist for several years, then change suggests either multi-year cyclic fluctuations in the prey and in Bass Strait ecosystems or changes in the food webs.

As long-nosed fur seals recolonise Bass Strait, it is important to consider the changes this may bring. Our research program is investigating the predator-prey relationship between this species and seabirds, a natural part of their diet.

Read on for more information:

To find how many seals become entangled and the materials that that cause the most harm we monitor seal entanglement rates at Seal Rocks, where during research visits we typically capture and release 50% of the entangled seals that we observe because they are difficult to catch in the wild and are often in the water. Since 1997, we have seen 520 entangled seals at Seal Rocks and removed debris from 274. Trawl net (usually green) has been the most common material on entangled seals, but its frequency has decreased in recent years while monofilament (fishing) line has been increasing.

To further reduce the impacts of trawl netting fragments entangling the seals we provided 100 custom-made bins to the South East Trawl Fishing Association (SETFIA) fleet. The bins significantly increased the rubbish returned to land for disposal and there are early signs that the prevalence of seal entanglement in trawl nets has reduced. Plus, drone surveys are improving our ability to monitor the problem and determine whether projects such as the ‘Bins on Boats’ are successful.

We have also determined that 21% of scats (poos) from Seal Rocks contain plastic, mostly microplastics of clothing filaments confirming that the fur seals are ingesting plastics from the environment.

For the latest information please check:

In collaboration with other researchers, we monitor Australian fur seal populations by recording the number of pups. Australian fur seals were over-harvested during the 1800s and have not yet recovered. During most of the 1900s, less than 10,000 pups were born annually, their numbers however started to increase during the 1980s and 1990s and the peak was reached in 2007 at around 21,400 live pups. Recovery was expected to continue, yet a species-wide survey recorded a 20% decline in 2013 that was sustained in the 2017 survey.

Currently there are 26 breeding sites throughout south-east Australia, and while most pups are born at four sites in Victorian Bass Strait, this is where most of the decline is being observed. New colonies are growing in Tasmania, potentially signalling the start of a change in preferred habitat for the species.

For the latest information you can access our open-source papers:

Censuses of the whole population occurring every 5 years, so to fill in the gaps we perform annual surveys at Seal Rocks and The Skerries using the drone. This allows us to survey more frequently without disturbance and obtain more data to better understand the decline and changes in the ecosystem. As a result of these surveys there are thousands of seal photos that need counting, and we are hoping you can help us by taking on the role of Citizen Scientist this June and completing the Seal Spotter Challenge. No experience or expertise needed! 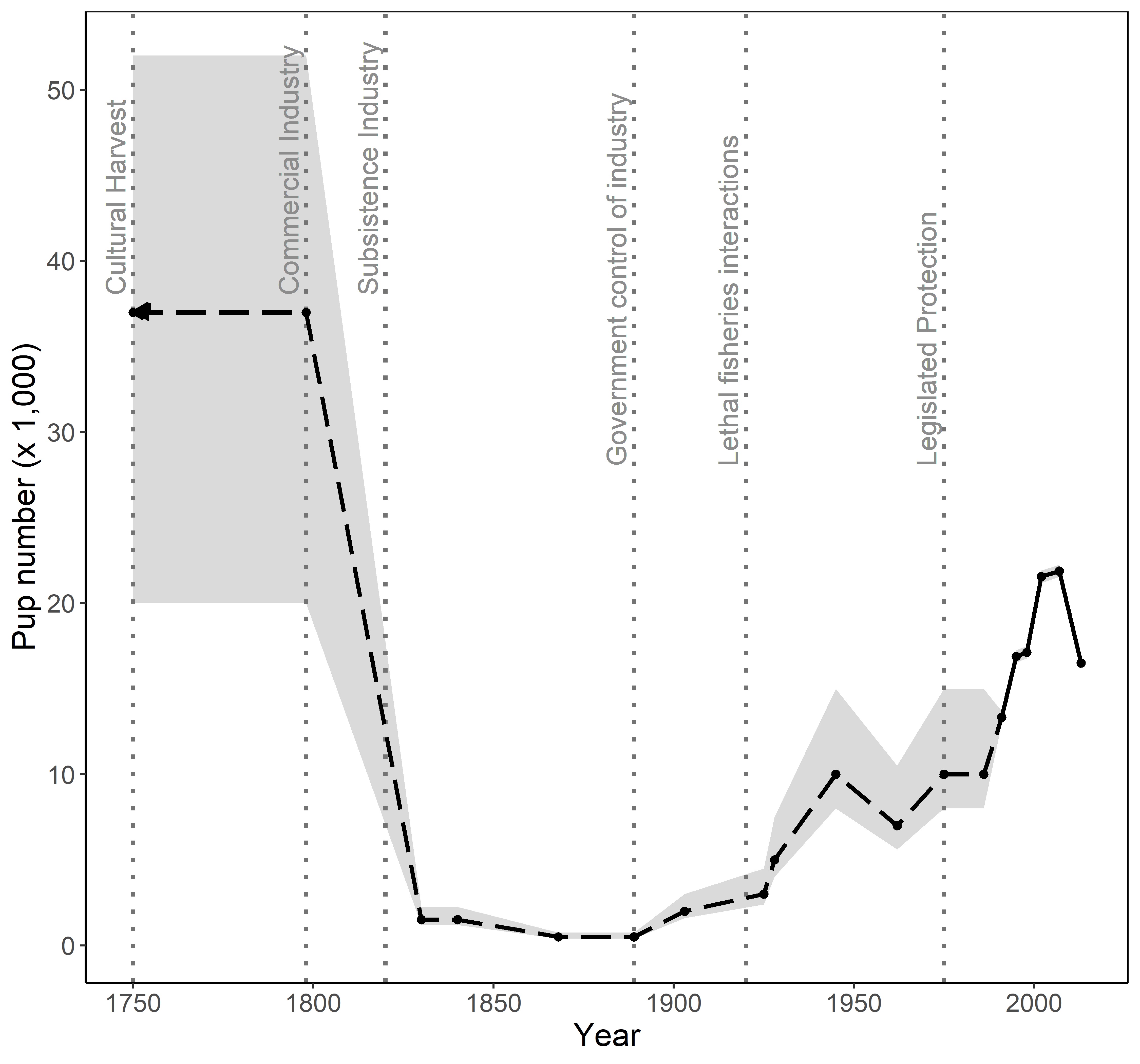 The core fur seal research performed by Phillip Island Nature Parks focusses on their population status and size and the factors that affect the number of pups born and their survival. We are using technology and novel methods to problem-solve threats to marine conservation.

One such project is investigating sound, boat visitation and stress at Seal Rocks. You can find out more here: link to Soundscapes and seals – Scientist in Residence.

We recently completed an exciting project in partnership with the South East Trawl Fishing Association (SETFIA) called ‘Bins on Boats’. 100 custom built bins were provided to commercial fishers to capture more waste at sea and reduce the impacts of trawl netting fragments entangling the seals. The bins significantly increased the rubbish that was returned to land for disposal and there are early signs that the prevalence of seal entanglement in trawl nets has reduced. You can read the full report here. We were very excited to participate in the Royal Society of Victoria science event at Parliament House to celebrate the fur seal research being performed by the Nature Parks 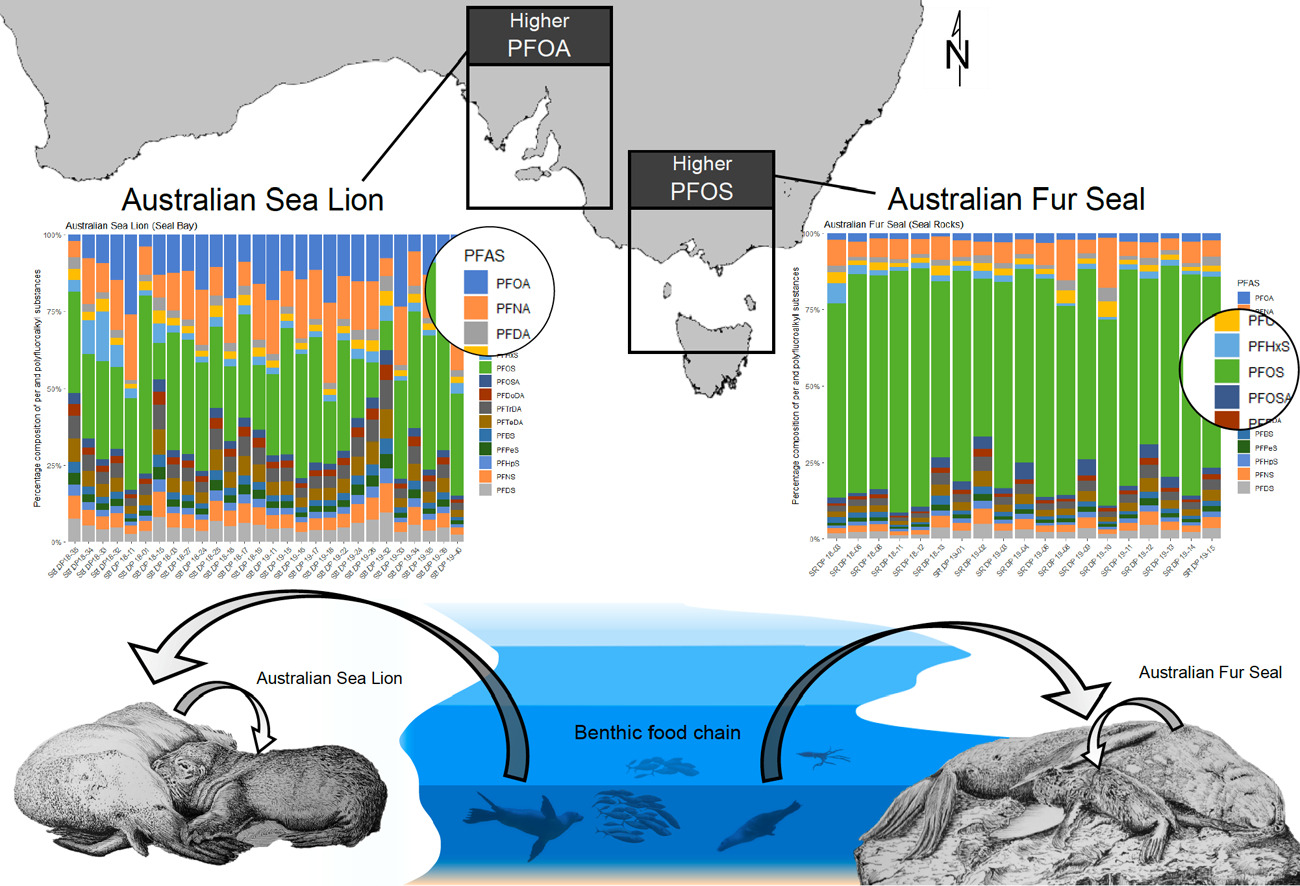 Australian sea lions and Australian fur seals feed primarily off the ocean floor and have high levels of PFAS contamination (flame retardant chemicals) that may be affecting their health. Source, Taylor et al. 2021.

Through collaborations and PhD candidates, we are investigating the level of potentially harmful toxicants that the seal pups have: it is possible that such chemicals and contaminants are affecting the birth and/or survival of the pups. To date in the Australian fur seal populations we have found diseases that cause abortion and high levels of persistent organic pollutants (POPS) and per- and poly-fluoroalkyl substances (PFAS, also known as flame retardants). Human-type bacteria resistant E.coli are also being detected, showing how broadly human waste travels in the marine ecosystem.

Recently we have embarked on a research project to explore the marine soundscape for Australian fur seals at Seal Rocks. In this project we are testing whether higher levels of boat and jetski visitation in summer when the seal breeding season occurs is causing stress or disturbance to the seals. For more information check-out our Scientist in Residence.

See our most recent research here: