New environmental star on the horizon

New environmental star on the horizon

At the entrance to Phillip Island’s Summerland Peninsula, where three distinct landscapes meet, the new Penguin Parade visitor centre has emerged out of what was once a car park.

This architecturally acclaimed, star-shaped building, due to open its doors to the public on Thursday 25 July, nestles comfortably at the junction of wetland, dune and headland, allowing the landscape and the environment to be the heroes in this environmentally sensitive area, but this has not always been the case.

In 1927 the Summerland residential estate was created with 774 allotments. At its peak it consisted of 183 houses, a motel, a general store and a shell museum. Research through the 1970s and 80s demonstrated that the remaining penguin colony was in decline as a result of human settlement, and it was predicted that unless action was taken, the penguin population would be locally extinct by 1997.

In 1985 under the oversight of the Hon. Joan Kirner, the historic Summerland buy-back scheme was announced. By 2010, the last of the houses was removed, and Summerland Peninsula was returned to the penguins.

“Nearly one hundred years of history and learning has brought us to a point where we better understand the balance of primarily protecting wildlife and its habitat, and operating a successful eco-tourism venture in this sensitive environment,” said Phillip Island Nature Parks’ Major Projects Manager Damian Prendergast, the man charged with overseeing the development of the Penguin Parade visitor centre

An Environmental Management Plan outlined the mitigation measures put in place to minimise the impacts on wildlife and surrounding habitat before, during and after the completion of the development, and included daily wildlife inspections.

Kane Constructions worked closely with the Nature Parks to link the three distinct landscapes of dunes, headland and wetlands through the creation of mounds and valleys for water to flow across the land, and adjusted finished levels of landscaping to ensure they were suitable for penguin occupation.

“Environmental considerations were paramount during the course of this development, and informed all of our actions and decisions as we work towards our ultimate goal of the Nature Parks becoming carbon, energy and waste neutral.”

Throughout the course of the project, over 85% of all construction waste was successfully recycled and diverted from landfill. Low carbon building materials have been used throughout the centre, including over 25,000 lineal metres of certified, sustainably-sourced Victorian Ash to create 750 metres of structural Glulam beams.

The vast expanse of roof boasts an impressive array of 666 solar panels, outputting a total of 206,440kW. The water filtration system recycles rainwater for non-potable use, windows are double-glazed, and there is increased insulation in the roof and floor.

The Penguin Parade visitor centre development was made possible through the generous support of the Andrews Labor Government with funding of $48.2M, with an additional $10M contributed by Phillip Island Nature Parks, a self-funded not for profit organisation. The visitor centre is due to open to the public on Thursday, 25 July. 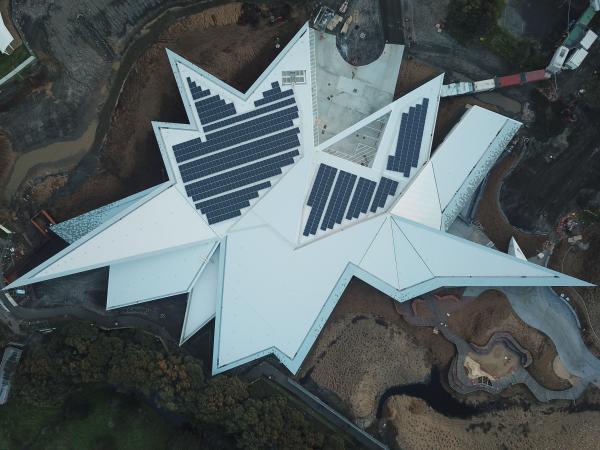