Zoos Victoria and Phillip Island Nature Parks have joined forces to urge Australians to blow bubbles instead of balloons at their next outdoor events.

A 2016 CSIRO study identified balloons among the top three most harmful pollutants threatening marine wildlife, along with plastic bags and bottles.

Speaking at the launch, Zoos Victoria CEO Dr. Jenny Gray said that balloons used at an outdoor event can accidentally make their way into our oceans.

“Every day balloons are released or escape at outdoor events because people don’t realise this is creating a very real threat to wildlife,” Dr. Gray said.

“On remote Lord Howe Island, Flesh-footed Shearwaters are in decline due to mistakenly swallowing rubbish that has found its way into our oceans. Adult birds will even feed it to their chicks thinking that it’s food.

“These baby birds are often found severely underweight and starving, with their stomachs full of rubbish including balloons and their attachments,” Dr. Gray said.

Closer to home, Phillip Island Nature Parks researchers have also identified balloons and their attachments as a major risk to Victoria’s marine wildlife.

Phillip Island Nature Parks Research Manager, Dr Peter Dann, said: “There has been a dramatic increase in the incidence of balloons and their attachments appearing on our beaches, with the potential to cause significant harm to Victoria’s marine wildlife.”

“During our regular research visits to Seal Rocks, we have had to rescue seals that have become entangled in balloon ribbons which can cause lasting damage.”

Already 12 Victorian Councils and 6 Zoos and Aquariums from across Australia have pledged their support for the campaign and to be balloon-free at outdoor events.

Zoos Victoria and Phillip Island Nature Parks are calling on the community to celebrate with bubbles instead of balloons at their future outdoor events. 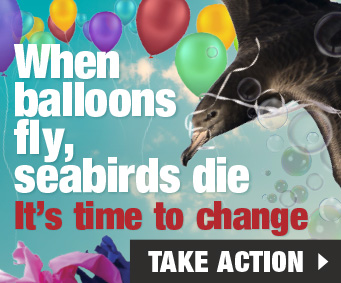