Due to temporary staff shortages, The Nobbies Centre and Antarctic Journey will be closed from Monday 17 January until Sunday 23 January at least. The Penguin Parade will be required to reduce visitor numbers, so we encourage you to pre purchase early. Tickets are available here from our website. Visitors over 18 years of age will be required to show proof of double vaccination or medical exemption to gain entry to our attractions. All visitors over 8 years old must wear a fitted face mask indoors & outdoors when social distancing cannot be maintained. Thank you for your support, patience and understanding during these challenging times.

Roger the bushfire survivor and Ottie the orphaned koala have become parents, with Phillip Island Nature Parks’ rangers officially welcoming a little girl into the family.

Rangers at the Koala Conservation Reserve spotted the joey on a number of occasions over the last few months high up in the trees with Mum, but were unable to take a closer look until this week’s annual koala health checks.

“We estimate this little girl is about 8 months old now, and she is an absolute picture of health,” said Jessica McKelson, Conservation Manager with Phillip Island Nature Parks.

“The annual health checks are a vital component in our successful management of the koalas here on the island, and is one of the only times we have any direct, physical contact with them, as they are all wild koalas living in as natural a habitat as we can provide them.”

Dad Roger came to the Nature Parks early in 2020 as one of the 13 koalas cared for by rangers after being badly injured in the Black Summer bushfires. Roger has not yet been able to be released back into the wild like the other 12 bushfire survivors, as further investigation is still required into the effect of the burns on his paws, tendons and muscles.

Mum Ottie was translocated from the Otway Ranges in 2015 as orphaned ‘back young’, after the death of her mum, and was rehomed on Phillip Island with two other young female koalas, Johanna and Ella, who have all been successfully raised at the Koala Conservation Reserve.

“Ottie and Roger were released into the semi-wild enclosure here in late 2020, and we were so excited when we first noticed a bulge in Ottie’s pouch in August this year.”

“We are just so thrilled that out of the devastation of the bushfires, and the loss of Ottie’s mum, we’ve been able to welcome this new life, and this new little bundle of joy into the Nature Parks family here on Phillip Island.” 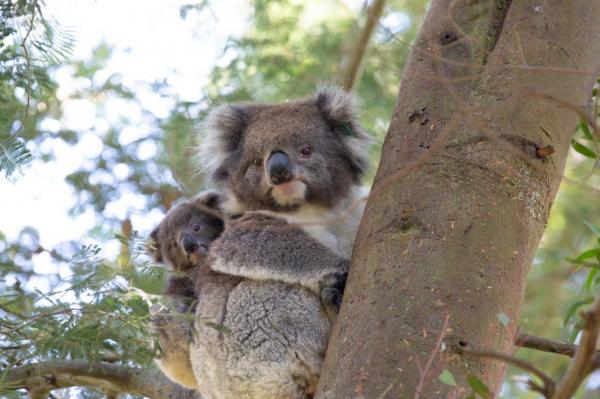