All about the short-tailed shearwater

Short-tailed shearwaters are one of more than 30 species of shearwaters, and one of the few migratory birds that come to Australia to breed. They have a short tail with blackish brown feathers and are often seen skimming along the ocean's surface at high speeds. With their long wing span and narrow wings, they can fly as fast as 85 km an hour!

These fascinating birds are also commonly known as ‘muttonbirds’, which is believed to have come from a diary entry by a European sailor that says ‘there are as many birds in the sky as sheep (mutton) in a paddock’.

When does short-tailed shearwater migration happen?

Over 34 million short-tailed shearwaters breed within Australia, making them the most abundant seabird found on our shores. They return to their breeding colonies in southern Australia at the end of September. Colonies can be found in coastal areas from New South Wales through Western Australia, with the majority found through Bass Strait and around Tasmania.

On Phillip Island, we have approximately 1.4 million that arrive each year around the 24th September from the Aleutian Islands near Alaska.

On their trans-equatorial migration flight, the short-tailed shearwaters travel to many other places including Antarctica during foraging trips, then as they migrate north they pass New Zealand up to Japan, skirt past Siberia to Alaska and can be found off the coast of North America. Most birds complete this spectacular migration of 15,000km each way in less than four weeks.

Once they return, shearwaters begin by renovating old burrows or building new ones that extend one to two metres long in sandy headlands amongst low lying vegetation like bower spinach and tussock grasses. From early April to late September, they will spend all of their time out in the ocean, resting on the surface of the water when needed.

What do short-tailed shearwaters eat?

Short tailed shearwaters are excellent swimmers, diving as deep as 50 meters in search of prey such as krill, fish and squid. Their beak is slender with a hook at the end to assist in catching their prey.

The circle of life for short-tailed shearwaters

On their return to the colony, short-tailed shearwaters begin to seek out their partner from the previous breeding season. They spend the nights courting, sleeping and renovating their burrows.  They mate in early November, then head out to sea for two weeks which is called the ‘honeymoon’ period.

When they return late November, they lay one large white egg (85g) and both parents share the incubation in 12-14 day shifts over an average of 53 days. The egg hatches in early January and both parents feed the chick regurgitated food inside the burrow. Chicks can wait up to two weeks between meals when the adults travel to the waters around Antarctica to feed.

Parents begin their final foraging trip and migration in late March with the aid of strong winds, leaving behind a chick still covered with brown down, almost twice the weight of an adult. The chick stays in the burrow for the next 3-4 weeks converting its fat and oil reserves into muscle. During this time it also replaces its down with adult feathers. At the end of April the fledglings begin their first migration, utilising the strong westerly winds to follow their parents north.

In the past, both local Indigenous people and European people consumed the shearwaters on Phillip Island. The Bunurong/Boonwurrung felt the nutrient-rich oil found in short-tailed shearwaters had medicinal qualities for such health issues as arthritis. The shearwater eggs were also sought after by early European settlers who threatened the survival of the colonies with their unsustainable overharvesting practices.

Current threats include natural predators like pacific gulls, ravens, swamp harriers, hawks and eagles, with eggs at risk from silver gulls, ravens and large gulls. A number of colonies have disappeared due to habitat loss from farming and urban developments, soil erosion, foxes, roaming dogs, feral cats, and the encroachment of weeds like Kikuyu grass.

When fledglings take off for their migration they can inadvertently land on roads, perhaps because they mistake street and car lights for the sun and water, and are killed by cars. At sea, short-tailed shearwaters are affected by overfishing, entanglement in fishing nets, oil spills and the ingestion of and entanglement in plastic pollution.

Short-tailed shearwaters are now a protected species. Phillip Island Nature Parks provide a sanctuary for the short-tailed shearwaters. Rangers protect them through predator control programs, habitat management, education and a Shearwater Rescue Patrol to safeguard fledglings landing on our roads as they begin their migration. 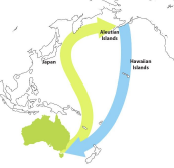 Short-tailed shearwaters by the numbers