The Perils of Ferals

The perils of feral animals

Feral animals in Australia pose one of the biggest threats to our native fauna and flora. There are a range of pest animals that live across Phillip Island and have a negative impact on the environment and biodiversity.

Foxes and feral cats threaten wildlife, domestic pets and livestock by preying on these animals and spreading disease. Other invasive pest animals like rabbits, Indian mynas, starlings and feral bees also impact our native wildlife by competing for food and resources.

Together with the local council and community, we’re working towards removing pest animal species from Phillip Island to ensure the survival of our native species in this fragile ecosystem.

Over the past 25 years, nearly 3,400 little penguins have been found killed across the whole island. Foxes have the instinct to kill more than they need for food when given the opportunity, as well as burying extra food for a rainy day. This behaviour can result in ‘surplus killing’, which leads to large losses of native wildlife.

In 2004, a Fox Eradication Strategy was introduced with the aim of removing all foxes from Phillip Island. Intensive baiting across private and public land, as well as spotlight shooting, den fumigation and trapping led to a comprehensive knockdown of the fox population.

Since 2015, no physical evidence of fox activity has been found on the island, although trained fox detection dogs and camera traps are used to monitor potential refuges and areas of reinvasion.

Feral cats are adaptive, skillful predators and known to negatively impact island ecosystems around the world. Feral cats are those that live and reproduce in the wild and survive by hunting or scavenging; none of their needs are satisfied intentionally by humans. The potential for feral cats to impact Phillip Island’s little penguin and short-tailed shearwater populations is high, particularly in the absence of foxes. 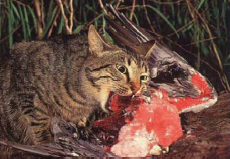 Their impact doesn’t stop at seabirds: feral cats have contributed to the extinction of around 70 Australian species including mammals, birds, reptiles and amphibians.

Feral cats also pose an indirect threat through the spread of disease. Toxoplasmosis is a feral cat borne disease that can infect most types of warm-blooded animals. It’s usually spread by exposure to infected cat faeces and is known to be fatal to native Australian mammals such as eastern barred bandicoots (Perameles gunnii).

The close proximity of urban development to rural and natural ecosystems where feral cats live increases the risk of the spread of such diseases to both native fauna and domestic pets.

The European rabbit is a major environmental pest across all of Australia. Rabbits directly compete with many native animals for food and shelter and have negative effects on native flora through ring barking, grazing and browsing. Feral rabbits may have caused the extinction of several small ground-dwelling mammals from Australia’s deserted areas, and have contributed to the decline of many native species.

Managing the rabbit population is complicated. Rabbits don’t stop at property boundaries and coordinated effort between land managers is critica. As both native and introduced predators eat feral rabbits, a careful approach is required for effective and sustained management. 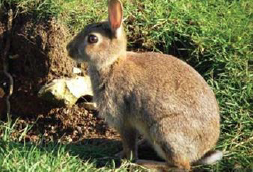 The successful management of pest animal species on Phillip Island has seen an increase in the number of little penguins, hooded plovers, cape barren geese and short-tailed shearwater breeding on Phillip Island.

In the future, other small to medium-sized mammal and bird species that are facing extinction on the mainland may be reintroduced to Phillip Island. This could include species such as the long-nosed potoroo, rufous-bellied pademelon and bush stone-curlew.