A guide to Australia’s Little Penguins

A guide to Australia’s Little Penguins

Only slightly bigger than a bowling pin and weighing just under a kilo, it’s easy to see where Little penguins (sometimes called fairy penguins or Little Blue Penguins) get their name. Of the 18 penguin species around the world, Little penguins are the smallest. They’re also the only species of penguin with blue and white feathers.

Little penguins are found along the coastlines of southern Australia and New Zealand, but Phillip Island is home to the biggest colony – with a whopping 40,000 breeding penguins found on the Summerland Peninsula.

Read on for some more fun facts about the smallest penguin of them all.

The history of Phillip Island penguins

Before Europeans settled in Australia, there were 10 Little penguin colonies around Phillip Island. With the construction of roads, infrastructure, housing and land clearing of their natural habitat, as well as introduced predators like foxes, nine of these colonies disappeared over time.

The last remaining colony was on the Summerland Peninsula, where numbers of Little penguins were also on the decline until 1985, when the Victorian Government initiated a 30-year scheme called the Penguin Protection Plan.

Since then, dedicated rangers of Phillip Island Nature Parks have worked at rehabilitating the area for the Little penguins by placing wooden penguin boxes throughout the colony, introducing a fox eradication program, removing plant weed species and replanting with native vegetation that is ideal for Little penguins. 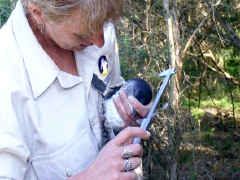 Today, Phillip Island Nature Parks protects and manages 20% of Phillip Island, including the Summerland Peninsula. The money raised through tourism goes towards helping to protect a variety of flora and fauna, including Little penguins, through environmental management, education, operations and research.

By discovering all we can about Little penguins, we not only help people learn about these fascinating animals, but also work to protect them on land and in the ocean.

Life as a Little Penguin

Little penguins are seabirds that don’t fly, which means they breed on land but forage for food at sea. They have wings that are excellent for using as flippers when swimming and deep diving in the ocean.

Around Phillip Island, adult Little penguins can spend over four weeks out at sea fishing in the Bass Strait and Port Phillip Bay. They eat young barracuda, anchovies, red cod, warehou and pilchards, as well as interesting things like squid and even sea jellies. In fact, penguins can eat about 25% of their body weight (approximately 250g) in a day!

Little penguins spend approximately 80% of their lives in the ocean, only coming to shore to maintain their burrows, breed and raise young, as well as moult their old feathers.

Before coming to land, they gather offshore in groups called ‘rafts’. They wait for dusk before crossing the beach, to hide from predators such as birds of prey like pacific gulls and sea eagles. They waddle across the shore in groups and follow familiar tracks back to their burrow. Along the way, they look for landmarks or listen to a partner calling to help them find their way home.

The Little penguin is the only species of penguin in Australia that breeds on our local shores.

Breeding season is usually between August to February, when females lay two eggs that are a similar shape and size as a chicken’s egg. During the breeding season, Little Penguins are what the scientists call ‘central place feeders’. This means once the Little penguins have finished hunting for food, they return to their burrow on land to feed their chicks.

Both male and female penguins build and maintain their burrow, lining it with vegetation. Most penguin couples pair up again each breeding season, although research shows that between 18% and 50% will ‘divorce’ if breeding doesn’t produce chicks.

Growing up as a Little Penguin

Both Little penguin parents take it in turns to incubate their eggs, and after around 35 days, the eggs hatch.  The parents take turns staying with their chicks until they are three to four weeks of age, feeding their chicks by regurgitating food caught at sea.

At around four weeks of age, the chicks are left on their own while their parents continue bringing food back, returning as often as possible to feed them. But growing chicks are hungry, so they’ll try to get food from any adult they come across.

When they’re around eight weeks of age, Little penguin chicks leave their nest behind and head out to sea for the first time. Parents don’t teach the chicks how to survive, so they have to learn to swim and catch food instinctively by themselves.

In their first year of life, penguin chicks travel further than adults. In fact, Little penguins from Phillip Island can reach as far as South Australia! They then return to the colony when they are about a year old, and begin breeding from two to three years of age. 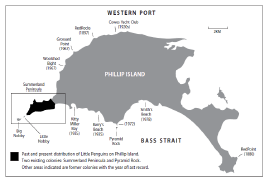 Experience the magic of watching these amazing seabirds waddle home from the ocean to their burrows any night of the year from our viewing platforms and boardwalks at Phillip Island Nature Parks. Find out more and book tickets here.