All about Phillip Island’s Koalas

Koalas are recognised around the world as an Australian icon. And although they’re super cute and cuddly-looking, there’s much more to these fascinating animals than their looks.

Koalas are marsupials, which are mammals that give birth to very undeveloped babies who then complete development in a pouch. Their natural habitat is the mainland of eastern Australia, but today they can also be found on several different islands like Phillip Island and French Island where they were brought across to protect them from hunting in the 1800s.

Read on to find out more about one of Australia’s most incredible native animals.

On Phillip Island, koalas are restricted to the existing mature vegetation – an area of about six hectares called the Koala Conservation Reserve. The KCR was opened in 1992 to provide a protected population of koalas for visitors to experience, and to aid the conservation and research of the koala population on Phillip Island. 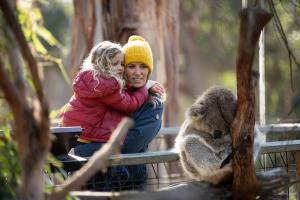 The money raised through tourism to the koala reserve goes towards helping protect a variety of flora and fauna, including koalas, through environmental management, education, ongoing operations and research.

Due to their low-energy diet, koalas sleep for about 20 hours a day! But aside from snoozing the day away, one of their favourite activities is eating. Their main food is eucalypt leaves, and on Phillip Island, they usually prefer eating coastal manna gum, swamp gum and blue gum Eucalyptus. However, they sometimes also eat buds, fruit and even bark.

The 500 - 1000 grams of leaves koalas eat each day provides them with as much energy as one bowl of breakfast cereal does for us! That’s why koalas have developed a low-energy lifestyle to compensate for their diet.

A koala's digestive system is also geared to get the most energy possible out of the eucalyptus leaves. They have an organ called a ‘caecum’ which contains millions of bacteria to help break down the fibre into substances that are easier to absorb.

Koalas as a species aren’t endangered, but they are listed as vulnerable across large parts of their range, mostly in QLD and NSW. The greatest threat to koalas is habitat loss. This has resulted mostly from bushfires and land clearing for timber, housing and roads.

Deforestation is disrupting koalas in their natural habitat, but there are ways that you can help. Recycling paper and cardboard and buying recycled paper products like printer paper, toilet paper, paper towels and greeting cards, reduces the amount of trees being cut down to make these products. If you live in an area that koalas inhabit, it’s also important to make sure your pets are kept safely enclosed.

Other threats to koalas include disease, road kills and dog attacks. Chlamydia is a common disease in koalas that can result in blindness, infertility and sometimes death. Scientists are currently researching a cure for chlamydia in koalas.

The koala circle of life

Koalas are capable of breeding when they reach their adult weight – for females that’s around two years, and around three years for males. But there’s a lot of competition amongst male koalas, so they often don’t start breeding until they’re around five years old.

Koalas mate at the right time so their young will emerge from the pouch when food is most abundant (December-February). Unlike other animals like the little penguin, male and female koalas don’t form bonds. Once they mate, the male leaves the tree and the pair have no further contact.

Koala babies are called joeys and are born 34-36 days after mating. They are about 19mm in length and weigh approximately 0.5g (about the size of a jelly bean). They’re very undeveloped at this stage, so they climb into their mother’s pouch and begin suckling.

For the first 22 weeks after birth, the joey stays inside the pouch. From this time until 36 weeks, they grow and become more independent, spending more and more time out of the pouch. 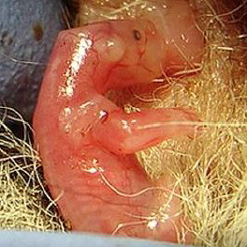 Then at 36 weeks when they weigh about a kilo, they no longer fit in their mother’s pouch. They spend a lot of time sitting on their mother’s back, but return to the mother’s belly in cold, wet weather and to sleep.

At around six to eight months, the mother gives her joey some of her droppings called ’pap’. This process passes along special microorganisms the joey will need to help break down toxins in the eucalypt leaves. Koalas are weaned at approximately 12 months old and are fully independent at 18 months.

Wander tree-top boardwalks to watch koalas in their natural habitat. Take a walk through the woodlands and enjoy the abundant birdlife, wallabies and echidnas. Book tickets to the Koala Conservation Reserve.