All about the Eastern barred bandicoot

The Eastern barred bandicoot is one of Australia’s most fascinating native animals. These small nocturnal marsupials were once widespread across southwest Victoria and Tasmania.

Today, the mainland Eastern barred bandicoot is endangered due to predation by foxes and the loss of much of its native habitat.

Fortunately, thanks to efforts to reintroduce the Eastern barred bandicoot into the wild on offshore islands, including Phillip and Churchill Islands, this species has been brought back from the brink of extinction.

Read on to learn more about the amazing Eastern barred bandicoot.

Why do we need to save the Bandicoot?

Eastern barred bandicoots are unique to Victoria and one of our rarest animals. Its near extinction is a result of predation by foxes and the loss of 99% of its native grassland habitat.

Where do Eastern barred bandicoots live and eat?

The Eastern barred bandicoot is a small brown-grey marsupial with distinctive pale bars or stripes across its back, pointed ears and hind legs that look similar to a kangaroo’s.

Grasslands and grassy woodlands provide the complex habitat preferred by these shy animals. They use their clawed forepaws to scrape out a depression which they line with grass. These nests tucked under tussocks of grass protect the bandicoots during the day while they sleep. While they are solitary creatures, mother bandicoots will share their nests with their young.

When it comes to diet, Eastern barred bandicoots are omnivorous, which means they eat a variety of plant and animal matter. However, they mostly feed on the grubs of beetles, crickets, grasshoppers, moths and earthworms. They use their strong claws and pointed nose to dig for food, leaving small cone-shaped depressions. They have also been found to eat a small amount of onion-grass bulbs and fallen fruit. They forage at night, leaving their nests within two hours after sunset.

Will they eat native orchid bulbs?

Eastern barred bandicoots are primarily insectivorous and only eat small amounts of plants, such as bulbs of onion grass and fallen orchard fruit. Studies of their diet at a number of release sites have not found any indication that they eat native orchids, despite the native grasslands where they live being rich in orchids, indicating that the two can coexist.

The bandicoot circle of life

Eastern barred bandicoots have a very rapid breeding cycle. Babies are born 12.5 days after breeding, with 1-3 babies in each litter. The babies stay in their mother’s pouch for 55 days before they wean, and leave the pouch at about three months of age. Females can produce up to five litters a year, however breeding happens less frequently in summer and during times of drought. 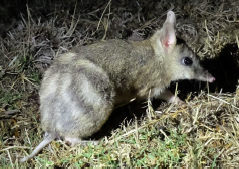 By 1972, bandicoots were down to one wild population in Hamilton, Victoria. From this population, 42 animals were taken into captivity in 1988 to form a breeding program in an effort to conserve the species. From these 42 animals, just 19 successfully contributed to the breeding program.

In initial efforts to return the Eastern barred bandicoot to the wild, eight reintroduction sites were established. In 1989, the first 10 bandicoots were trial released into Woodlands Historic Park.  From here further populations were introduced to Hamilton Community Parklands (1989), Mooramong (1992), Floating Island Nature Reserve (1994), Lake Goldsmith Wildlife Reserve (1994), Lanark (1994), Cobrac Killuc Wildlife Reserve (1997) and Mount Rothwell (2004). Of these eight sites, three are home to breeding bandicoots today, with others failing primarily due to predation by foxes.

In September 2021, thirty-three years after Eastern barred bandicoots were first taken into captivity, their numbers had increased to around 1500 individuals and their status was changed from extinct in the wild to endangered. In a world first this has allowed the captive breeding program to come to an end. Ongoing research has shown that their numbers and range are increasing, a promising sign for the future of this incredible marsupial.

Check out the story map here.

Why release on Phillip Island?

The release of endangered species into the Nature Parks has been identified as a desired action in major planning documents that were developed in consultation with staff, major stakeholders and the community. These include Phillip Island Nature Parks' Strategic Plan 2012- 2017 and Environment Plan 2012-2017. An external review conducted by the IUCN Conservation Breeding Specialist Group found that releasing the Eastern barred bandicoot onto a large fox-free island is the only course of action that may result in reasonable prospects for the long-term survival of the species.

What did the Churchill Island trial show?

Will they become a pest?

Will they cause any damage to the island?

Eastern barred bandicoots do not graze or browse and leave very little sign of their presence besides small conical foraging digs that are rarely more than 5 cm deep. There have been no reports of Eastern barred bandicoots negatively impacting natural habitats and it is important to remember that this vulnerable species needs assistance as it is currently extinct in the wild.

How can I see an Eastern barred bandicoot?

Bandicoots are very inconspicuous animals and are easily overlooked. This is because they only come out at night and do not form groups. Your best chance of spotting one is by torch in cleared areas at night, when they are most active. 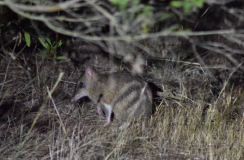 Find out more about our conversation efforts for the eastern barred bandicoot.