All about brushtail and ringtail possums

There are 23 species of possums found in Australia, two of which can be found on Phillip Island: the brushtail and ringtail possum. These are the most common types of possums, and there’s a good chance you could have one or more living in or near your own background.

Possums are native Australian marsupials. A marsupial is an animal that gives birth to babies that then finish developing inside their mother’s pouch.

Read on to learn more about two of Australia’s most well-known creatures.

The common brushtail possum is the most widely distributed possum across Australia, being found in all states and territories. They are silvery grey in colour with cream underparts and a white to brownish-yellow belly. They also have a bushy, black tail, black around the eyes and a black band across the snout.

Like the koala, possums have two thumbs on their front feet to help them climb. They have a hand-like back foot which also enables them to grasp onto branches with all four limbs for climbing, as well as sharp claws and a strong, flexible (prehensile) tail for curling around branches.

Common brushtail possums lead a largely solitary life, but they communicate to others through sound and scent. Their voice is a characteristic loud series of rattling nasal coughs and hisses.

Where do brushtail possums live?

Common brushtail possums are an arboreal animal, which means they live in trees and are well adapted for climbing.

Although naturally found in most forest and woodland habitats, common brushtail possums have adapted well to living in urban areas. They can commonly be found in roofs of houses in areas where their natural habitat has been removed. As they are nocturnal, brushtail possums make their home in hollows of trees where they will spend daylight hours, spending the night foraging for food to eat. 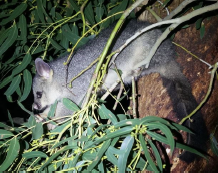 Common brushtail possums breed throughout the year, with most births occurring between March and November. The female gives birth to a single, furless young weighing only 2g after 17.5 days gestation.

The young then makes its way to the mother’s pouch where it attaches to one of her two teats. The joey stays in its mother’s pouch for four to five months and then travels around by riding on her back.

Brushtail possums by the numbers

The ringtail possum is a medium-sized possum found along the east coast of Australia and throughout Tasmania. Their fur is a grizzled grey-brown above with a reddish tinge on their limbs and sides. White fur is found on their underparts, with patches below and behind their ears. They also have a distinctive white tip to their long tail.

Like the brushtail possum, ringtail possums also have two thumbs, hand-like back feet and sharp claws to help them climb. Their long prehensile tail has a friction pad on the underside to help cling to branches as well as carry vegetation.

When not in use, they curl the tail up into rings, which is how they get their name. They move through the trees by leaping and bounding and crawling through foliage. Ringtail possums are shy and not easily sighted, but are more commonly heard. Their call is a soft, high-pitched, insect-like chirping sound. At times they also make a louder ‘zip zip’ call.

Where do ringtail possums live?

Ringtail possums are common in open and closed forests, coastal shrubs and gardens. Being a nocturnal species, during daylight hours they shelter in large round nests (called ‘dreys’) made of shredded bark, leaves and twigs in dense shrubbery, or a tree hollow lined with leaves. They are a social animal, living as family groups in one drey.

At night, ringtail possums spend their time foraging for leaves, flowers and fruits of both native and introduced plants. During the day, they will eat their own faecal pellets to extract the nutrients twice to ensure they get the most out of their food.

Breeding for the ringtail possum usually occurs from April to November, with usually one or two litters a year . The newborn attaches to a nipple for approximately 50 days and then stays in the pouch for another four months.

It then either stays in the nest or clings to its mother’s back and is weaned by six months of age. Of all the 23 possum species, only with the ringtail possum is the care of the young often shared by the father.

Ringtail possums by the numbers

Conservation of possums: How you can help

The general decline of possums is thought to be due to logging and land clearance, as these activities result in a loss of habitat. Dog and cat attacks, as well as cars, also pose a threat to possums.

You can help by keeping pets indoors after dark, driving slowly in wildlife areas, replanting habitat for them to dwell in and placing a possum box in your yard. If you come across any sick, injured or orphaned possums, contact Wildlife Victoria on 1300 094 535 for guidance.