All of our attractions are open. Our best valued ticket is a 4 Parks Pass which includes booked entry to the Penguin Parade, plus open-dated entry for up to 6 months from date of booking to the Koala Conservation Reserve, Churchill Island and the Antarctic Journey at the Nobbies. Revenue raised is invested into vital research, environment, and education projects. If you feel unwell, please reschedule and stay at home. Thank you!

What's happening in nature on Phillip Island during Autumn?

Autumn is an exciting time in nature with calm days and clear nights perfect for stargazing. 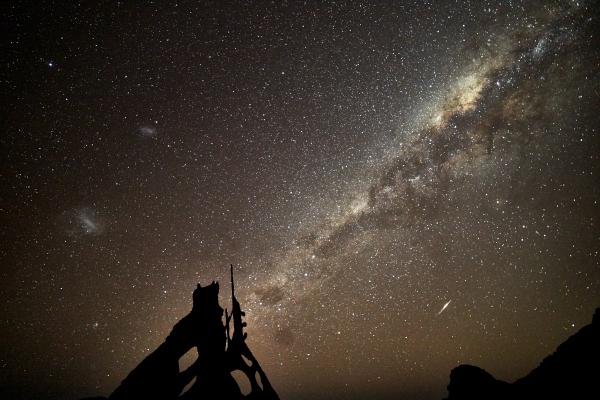 The average number of penguins crossing the beach at the Penguin Parade in February was 1,948 penguins per night. This is an increase of 170% from the 712 penguins recorded in February 2020.

Most chicks have already grown and left their burrows to go to sea, with a few older chicks remaining and being very well fed by their parents. Most adults have finished breeding (earlier than last year) and are coming ashore to moult, where they double their body weight and spend 17 days on land fasting as they grow a completely new set of waterproof feathers and “spruce up their winter tuxedos” for the cold months ahead. 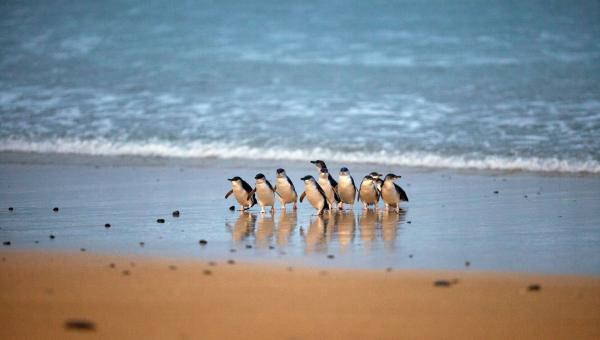 Out at Seal Rocks

During autumn, Australian Fur Seal pups are growing strong and their new silver, waterproof coats enable them to spend more time in the water. Adults are hauling out onto the rocks to undertake their annual moult where they lose their fur and grow a new coat. Fur seals have two layers of fur while other seals have only one. Their coats consist of a woolly underfur with long coarse outer hairs to trap air. This double layer of fur combined with their body fat keeps them insulated and toasty warm.

Our team visited Seal Rocks in early March and disentangled an adult female from a length of recreational fishing line that was hooked through her mouth and under her nose. They also released a juvenile male from a fish scaling net (also used as a burley bag). They recorded the birds they saw and collected 50 seal scats for diet analysis. 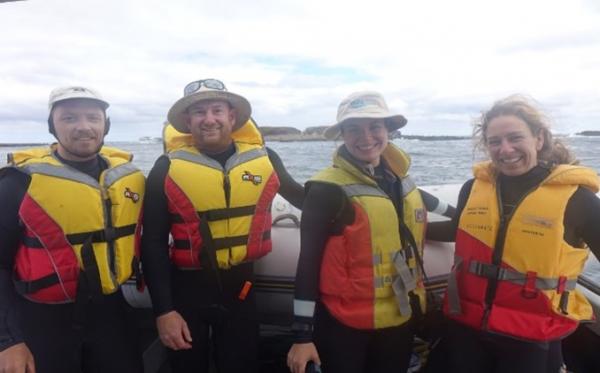 Around the coast and on the beaches

Phillip Island’s Hooded Plover breeding season had quite a good start with the first nest found at Anchorage Beach found in August 2020, which produced three fledglings. In mid-February 2021, there were 18 pairs making 46 nests with 101 eggs laid. Of these, 20 have hatched and eight have fledged to date. We are hopeful for a strong finish to the season as there are still a few more chicks waiting to fledge. We will report on the season soon and, in the meantime, please remember to stay clear of signed and fenced areas and keep your dogs on a leash. This helps us to continue this amazing community effort of providing an island haven and giving these threatened birds the best chance of survival.

Adult shearwaters are preparing to take off to start their 16,000 km migration north to waters around the Aleutian Islands off of Alaska. This means they will leave the chicks alone in the burrow as they finish growing their adult flight feathers. In mid to late April, they will start taking off on their own for the first time – often ‘crash landing’ on roads. During this time, we will undertake our annual Shearwater Rescue program to assist their safe travels. This will include turning lights off on the bridge, lowering speed limits in ‘hotspots’ across the Island and ranger patrols. Many thanks in advance for your support in driving carefully and contributing to yet another incredible conservation story.

Our team and volunteers recently captured 29 Eastern Barred Bandicoots on Churchill Island. They selected the 10 most suitable individuals (six females and four males) for release into a new home near Skipton, Victoria as part of a ‘guardian dog’ trial in which Maremma dogs will keep foxes away from the sheep on the property, and keep the bandicoots safe in the process. The bandicoots were also fitted with radio-transmitters that will be used to track their movements and assess their survival.

Our Conservation Team continues to rescue and care for sick and injured wildlife and respond to calls between 7.30am and 4pm.

The team is caring for moulting penguins who had not been able to take in enough food before the moult and were found starving.

As we approach winter, we expect to have a few larger seabirds arriving on our shores who will need care as they are very far from home and often exhausted. In the past, we have treated species such as Fiordland Crested and Rockhopper Penguins and albatross.

Please watch for wildlife on the roads day and night – thank you.