Hi, I’m Jess Taylor. I’m doing my PhD at the University of Sydney, in collaboration with Phillip Island Nature Parks and the Université Paris-Saclay. My project is looking at the effects of human-generated (anthropogenic) noise on the Australian fur seal breeding colony at Seal Rocks.

In addition to the support received from the University of Sydney, Université Paris-Saclay, and Phillip Island Nature Parks, this project is supported by the Penguin Foundation, the National Centre for Scientific Research (CNRS, France), the Holsworth Wildlife Research Endowment & Ecological Society of Australia, the Foundation for Australia’s Most Endangered Species (FAME), and the Royal Zoological Society NSW & Paddy Pallin Foundation.

Anthropogenic noise pollution has become a widespread issue in the world’s oceans, affecting many marine species. Little is known of its impact on Australian fur seals, but there is some evidence that loud boat noise can disrupt normal behaviour and vocal communication, which can negatively impact health and survival.

Seal Rocks is the largest Australian fur seal breeding colony and a key tourism destination. Visitation peaks during the pupping/breeding season, a time in which the colony is particularly vulnerable to disturbance. In addition, there are regular breaches of the minimum approach distances, which are 60 m for boats (with the exception of authorised tour and research vessels) and 260 m for jet-skis. Despite this, the level of noise produced by visitation and its impact on the colony remains unknown. The main aim of my project is therefore to determine the impact of anthropogenic noise, specifically boat noise, on the Seal Rocks colony, and to assess whether the current management strategy at the site is adequate.

To address this, we are taking a multidisciplinary approach to create an acoustic impact model of visitation at Seal Rocks. The model will be based on data from underwater acoustic and visual monitoring of boats approaching Seal Rocks, pup health, physiological indicators of stress, and behavioural response to controlled boat noise exposure. All data will be collected during high visitation (summer) and low visitation (autumn/winter) for two consecutive years to facilitate comparisons between season and between year.

The outcomes of my project will be communicated to key stakeholders to inform management regulations at Seal Rocks. In addition, the developed acoustic impact model will be adaptable to other Australian fur seal colonies, and to other seal and marine mammal species, with the goal of promoting best-practice guidelines for ecotourism at sensitive marine sites.

OBSERVATIONS FROM THE NOBBIES 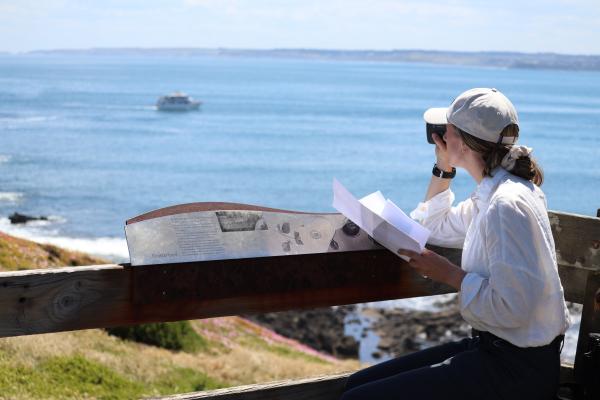 What will I be doing?

For up to 10 days at a time in December and January, I will be stationed on the boardwalk at The Nobbies to record boats approaching Seal Rocks as part of the acoustic and visual monitoring aspect of my project. Every 15 minutes from 8:30-13:30, I will count the number and type (e.g., small, medium, large, jet-ski) of vessels around Seal Rocks, note their position using a long-distance rangefinder and map of Seal Rocks, and categorise their speed (e.g., stationary, slow, medium, fast) and direction.

Why is this important?

The data collected during these observations has a dual purpose. First, it will be used to validate the underwater acoustic recordings (which will be happening concurrently), by providing reference points in space and time. Second, by visually cataloguing and quantifying visitation at Seal Rocks, we can identify visitation hotspots. Then, when we’re assessing pup health and stress, we can see if and how this varies in parts of the colony with differing exposure to visitation.

Long-distance rangefinder: Vortex Razor HD 4000. Will be used to record the location of boats relative to the observer (me), then using the location of known landmarks, we can calculate the distance of boats from Seal Rocks. This particular rangefinder is necessary as it can detect ranges up to 3,658 m.

Underwater passive acoustic recorders: JASON Highblue Signal Acquisition System by SMIoT, University of Toulon. Up to four underwater soundrecorders will be positioned near Seal Rocks to continuously record boat noise and visitation for one month at a time. 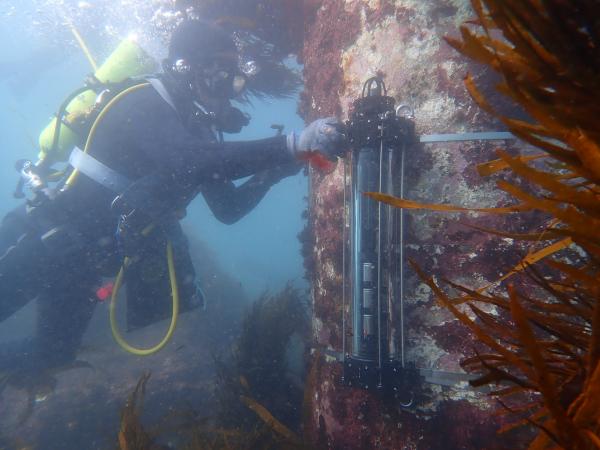 These are raw sound clips we have collected with the underwater recorders during the testing phase.