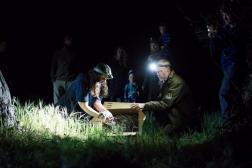 The mainland Eastern Barred Bandicoot (EBB) is extinct in the wild, as a result of predation by foxes and the loss of almost all of its native habitat. They live a solitary, secretive life foraging in open grasslands at night and resting in a shallow, cryptic nest during the day, usually in areas containing trees or shrubs. They are difficult to spot and the only sign of their presence is their small foraging digs. In Victoria the EBB Recovery Team has built three reserves on the mainland surrounded by fox-proof fences, totaling 800 ha. These reserves are the only places in Victoria where EBBs can now be found.

To save this species from extinction we need more fox-free land where this species can flourish. Fox-free islands may be an ideal home for the EBB. To test this, EBBs were released on Churchill Island (off the coast of Phillip Island) in August 2015. See here for a video on the release.

The release will be a trial to
(1) evaluate the suitability of local conditions for EBBs on fox-free islands which lie beyond their known historic range, and
(2) to demonstrate to the community what they might expect from an EBB release on large fox-free islands.

Looking to the future, the long-term survival of EBBs may depend on establishing self-sustaining populations on large fox-free islands. Such islands don’t require predator proof fencing, nor conducting daily fence checks and maintenance to ensure fence integrity, which are all costly and have failed in the past.

Although Churchill Island is considered too small (at 57 hectares) to support a self-sustaining population of EBBs, this trial is a key step towards achieving that goal. The majority of Churchill Island supports suitable woodland and grassland for EBB nesting and foraging and the island is free of introduced predators and competitors as a result of intensive pest control work by Phillip Island Nature Parks to eradicate foxes (2007), cats (1998) and rabbits (1999). Churchill and Phillip Islands are connected by a 100m concrete bridge which sports a rabbit and predator resistant gate at the bridge to safeguard the island at night.

The trial will be run by Phillip Island Nature Parks and is supported by Zoos Victoria and the Eastern Barred Bandicoot Recovery Team. It started with a release of 20 individuals in 2015 and is expected to last ten years. After the first two years, we will be able to determine the suitability of EBBs for a full release to larger fox-free islands such as Phillip Island and French Island. The remaining eight years of the trial will be used to refine EBB management techniques at all release sites.

This is an exciting step towards large, self-sustaining populations on islands where this species can be secure and flourish.

How are EBBs being monitored on Churchill Island?

Radio-tracking: tiny radio transmitters attached to collars allow us to follow the movements of bandicoots while they’re active at night, and to find their nests during the day. 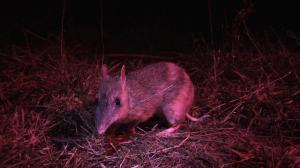 Live trapping: the health and reproduction of bandicoots will be monitored repeatedly during the trial. This also allows us to estimate the number of bandicoots on the island, survival rates and recruitment into the population over time. 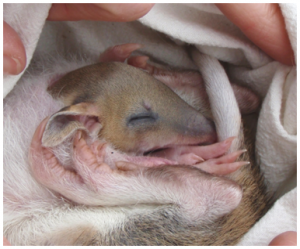 Camera traps: a series of motion-triggered cameras records animals, including bandicoots, as they move around the island. This also helps us monitor for unwanted pest species like rabbits or even cats and foxes.

Spotlight surveys: this is an alternative method to live trapping for estimating the number of bandicoots which uses distance sampling

Foraging signs: the number of scrapings made by bandicoots as they search for food is being compared in different parts of the island and repeatedly as the population grows and establishes.

Invertebrate monitoring: the influence of bandicoots on the invertebrates living on Churchill Island is being assessed by comparing areas where bandicoots have and haven’t been excluded.

Soil characteristics: the properties of soils like water permeability, nutrient composition and soil compaction is being compared between areas where bandicoots have been scraping in search for grubs and worms and areas undisturbed by bandicoots.

Genetic tests: the relationship between individuals is being monitored to ensure genetic diversity is maintained

Vegetation surveys: the use by bandicoots of different habitats and the influence of bandicoots on plant species, especially rare plants, is being monitored