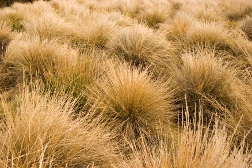 Fire can have a devastating short and long term effect on colonial nesting species such as little penguins and short-tailed shearwaters due to their synchronous breeding. Even cool burns in winter can decrease burrow density in the long term due to increased soil instability.

Phillip Island’s early fire history has not been accurately recorded, but it is thought the last major wild fires on Phillip Island were in the 1920s. Pollen studies have shown that fires in some areas of Phillip Island Nature Parks were more frequent in pre-European times. Since the 1920s the occurrence of a wildfire has been relatively low due to the large areas of grazing land, effective fuel reduction programs and hazard management.

Priorities for fire management have been identified in the ‘Phillip Island Nature Parks Fire Management Plan’ and the annual fire operation plans. This includes visitor and community safety, protection of life and property and the protection of wildlife habitat. In particular, this includes little penguin and short-tailed shearwater colonies and koala habitat.

Under the Country Fire Authority Act 1958 the Nature Parks must take all steps practicable, including preventative burning, to prevent the occurrence of fires, and minimise the danger of the spread of fires, on and from land vested under its management, including any roads.